The Religious Extremism the Media DOESN’T Tell You About

Written by: Carey Wedler at theantimedia.org via  hqanon

Violence is bad. Most people around the world, regardless of demographic, agree. That’s why people from all walks of life  even and especially Muslims  wholly condemned the Charlie Hebdo attack in Paris.

Predictably, however, many who protest Islamic violence are quick to advocate it themselves.

There may be components of the Quran that some groups believe advocate violence and eliminating infidels. This is what terrorists preach when they launch their attacks. But while these may be the most highlighted types of terrorism and political violence, the Christians and Jews castigating such acts are guilty, like Muslims, of belonging to a broad demographic with sects that “commit terror.”

On a larger scale, in 2003, George Bush declared that God “told him” to invade Iraq and Afghanistan. If Christians did not want violence committed in their name, shouldn’t they have protested? American citizens are 83% Christian and in 2003, it is undoubted that they made up some of the 72% of Americans who supported Bush’s “crusade.”

“But that’s justified because…9/11! It was retaliation and therefore justified war and violence!”

Because it is now common knowledge that Iraq had nothing to do with 9/11 and everything to do with war profiteering. Further, George Bush simply said that God told him to remove the tyrannical leaders. In his twisted messianic view, it had nothing to do with avenging violence done to “us”. This makes it aggressive violence as condemnable as the terrorist attacks in France. Did nearly hundreds of thousands of civilians need to die and suffer because of American terrorism?

Like many claim of the Quran, the Christian bible contains countless references to violence, including killing homosexuals (which Westboro Baptist Church would likely do if it could).

Further, Christians justify excessive violence on the part of Israelis not only because “Israel is a democracy!” and “Terrorists are bad!” but because they have religious underpinnings to their support of the Jewish state. Some (not all-so as not to collectivize) evangelical Christians believe that having Jews in Israel is central to achieving the rapture.  Therefore, to some, anything Israel does to Palestinians is justifiable after all, God wants the Jews there. How is advocating and funding (complicit through 100 billion U.S. tax dollars) war, bombings, and a racist police state not extreme?

Speaking of Israel, the Torah is extremely violent and the aggressive Israeli government has incorporated religion into its identity. It is eager to declare itself a Jewish state. 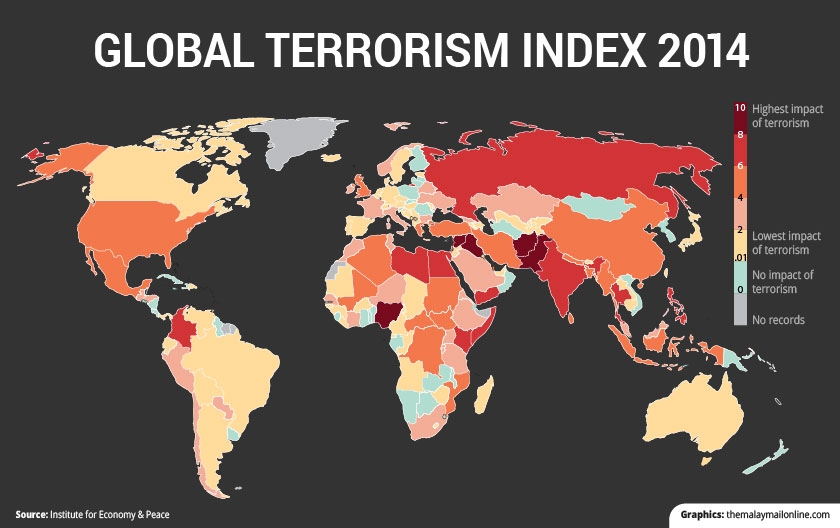 “But Israel is a democracy!”

Yes, with a Jewish star on its flag, and some (remember, collectivizing is bad!) religious Zionists who claim that they have the right to settle on Palestinian land because they are entering a “messianic age.”

One “settler,” Oster Baras,who moved from Ohio to Israel and serves as the Director of the Israel office for Christian Friends of Israel Communities Heartland, claimed:

“God is basically beckoning you; and realize that all you need to do is do your part…God doesn’t put cities down from the heavens; he’s never done that. He opens the opportunities, but humans have to make it happen.”

This sect of religious Zionists believes that God opening opportunities means kicking innocent people off of their land. And “making that happen” often requires violence. The Israeli government has taken to using bulldozers to demolish houses and humans alike. “Settlers” were guilty of 399 terrorist attacks, according to the U.S. State department’s 2013 calculations.

Even Buddhist terrorism is a growing problem in the world, but few condemn the religion of the Buddha and all of its subscribers. Saudi Wahhabism is at the root of the Islamic State, yet Americans do not attempt to stop the practices of Saudi Arabia, which beheads, cuts off hands, and punishes people for exercising the natural right to free speech.

Invariably, though, (non-Saudi) Islam is the devil and any conversation about the West’s interventionist policy that radicalized it is heresy.

And therein lies the most dangerous root of religious extremism: obedience to the state. Christians, Jews, Muslims, and the non-relgious in many countries exercise a substantial amount of  fanaticism toward their governments, which claim to represent their nationalities.

Being American or Israeli or Egyptian is a religion in and of itself. In America, citizens perform rituals: pledging allegiance to an inanimate object, voting, and celebrating the holidays of the holy founding “fathers” of the Constitution. Citizens harbor a magical belief that the state is their salvation, whether to implement their views or guarantee their freedoms. People perform similar rituals around the world to show their faith.

It is this “religious” extremism that has allowed war and destruction to occur and leads to the deaths of innocent children, women, and men. It leads people to glorify psychopaths like Chris Kyle who reveled in killing hundreds of people in Iraq. Is it not a little extreme to celebrate cold-blooded murder as a triumph of humanity? The same goes for citizens of any country or religion who rejoice in the loss of life.

Extremismwhether to religion, the state, or the two intertwinedis an impediment to peaceful civilization. It’s time to stop pointing fingers when the hands they’re attached to are soaked in blood.